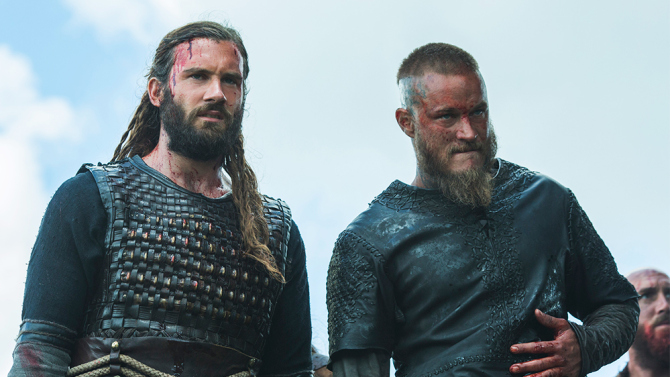 History’s investment in dramatic programming has yielded mixed results, but its best, enduring franchise, arguably, has been “Vikings,” which sails into its third season with considerable assurance and gusto. Showrunner Michael Hirst has managed to craft a compelling serialized storyline around the exploits of the Norsemen and their crafty leader, Ragnar Lothbrok, whose travels this time will eventually lead him to France. For now, though, Ragnar and company are busily trying to carve out a mutually beneficial relationship with the English King of Wessex, with ample bloodletting, lust and betrayal to go around.

The determination of Ragnar (Travis Fimmel) to improve the Vikings’ lives not through pillaging but farming, somewhat mystify his compatriots. But in the nothing-is-ever-easy department, King Ecbert (Linus Roache) needs Ragnar’s martial skills to help solidify his power, resulting in the inevitable bloody battles in the early episodes. Few programs, notably, do a better job of conveying military tactics than “Vikings,” and the skirmishes at the outset of season three are no exception.

Still, the jockeying for power doesn’t always involve an axe, with Ecbert setting his eye on Ragnar’s ex-wife, Lagertha (Katheryn Winnick), who is facing a threat to her own power while she joins Ragnar on his adventures abroad. There’s also more potential trouble at home with the arrival of a mysterious wanderer (“The Strain’s” Kevin Durand) whose cryptic utterances play into the superstitions of Ragnar’s current wife, Queen Aslaug (Alyssa Sutherland).

Hirst seems particularly fascinated by the clash of the two cultures, and “Vikings” can get a little thick from time to time on dramatic symbolism, what with the Pagans and Christians trying to live in harmony. Along the way, there are some very good scenes featuring Ecbert — Roache is especially good in the role — lusting after Lagertha, marveling at how there are no Saxon women like the warrior maiden, while forcing the former monk Athelstan (George Blagden) to uncomfortably and amusingly play translator.

Almost everything about “Vikings” is bold and brawny, and the show’s success has seemingly allowed for greater scope in bringing the eighth century to life in all its brutal glory. Indeed, amid a wave of period dramas generally made possible by international production, few are as fully realized or consistently satisfying.

Granted, History has journeyed a long way from its original profile, occasionally straying far from any legitimate claim to its name. And while this is essentially the popcorn version of a quality serialized drama — with more overt appeal to men than most — “Vikings” is the sort of nifty endeavor that can give the idea of shamelessly marauding in search of loot a good name.

Or, as the linguistically gifted Ragnar might be saying before the season’s over, “Vive la difference.”